Finally, some of Hollywood's leading ladies are saying no to cosmetic surgery. Forward thinkers, I say. A more plausible explanation is that these actresses are the ones most comfortable in their skin. It is baffling that the women who denounce plastic surgery are all British actresses, and none, so far, are American actresses. The American standard of beauty is youth, which is unfortunate. I love the British actresses Judi Dench and Helen Mirren, for both their craft and their natural beauty. Also, their faces move. Personally, I do not find plastic surgery to be attractive, but I do understand why some women are drawn to it--our collective fear of aging and critique in a world where beauty is considered to be an attribute of the young, where attractiveness is seemingly found in a facade, is troubling.

And the competition between women is horrendous.

I am all for preserving our beauty, but not our youth. Face creams, hair color, and some forms of plastic surgery (for a broken nose, liposuction, etc.) are types of beauty preservation that I don't shudder at.  I do, though, draw the line when it comes to surgical enhancement as an attempt to stay looking artificially youthful (which in itself, works to negatively amplify our insecurities!).  Am I hypocritical in this perspective?

How about preserving our DIGNITY as women?  Men seem to gravitate towards cosmetic surgery to a much lesser degree.  Look at the number of pro-cosmetic surgery/Botox injection ads in female-specific publications.  What example is Hollywood, with its penchant for superficiality, setting for young girls? I sure hope that Reese Witherspoon joins the anti-plastic surgery crusade.


Here is the article: 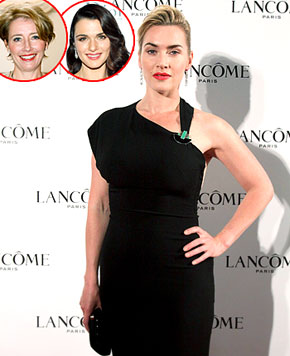 Natural woman!
Embracing her curves is nothing new to Kate Winslet, but now the actress is taking an active stand against the pressure in Hollywood for women to undergo cosmetic surgery.
PHOTOS: Celebs who celebrate their curves
The 35-year-old actress told London's The Telegraph that she and fellow British Oscar-winners Emma Thompson and Rachel Weisz have formed what she describes as the "British Anti-Cosmetic Surgery League."
PHOTOS: Plastic surgery nightmares
"I will never give in," she said. "It goes against my morals, the way that my parents brought me up and what I consider to be natural beauty."
While the women's resolve not to go under the knife is real, their league might be more of a way to speak out against ageism than an active organization.
PHOTOS: Hot Brits
"I am an actress, I don't want to freeze the expression of my face," Winslet said.
Thompson, 52, agreed. "I'm not fiddling about with myself," she exclaimed. "We're in this awful youth-driven thing now where everybody needs to look 30 at 60."
Newly-married Weisz, 41, said that people "who look too perfect don't look sexy or particularly beautiful."