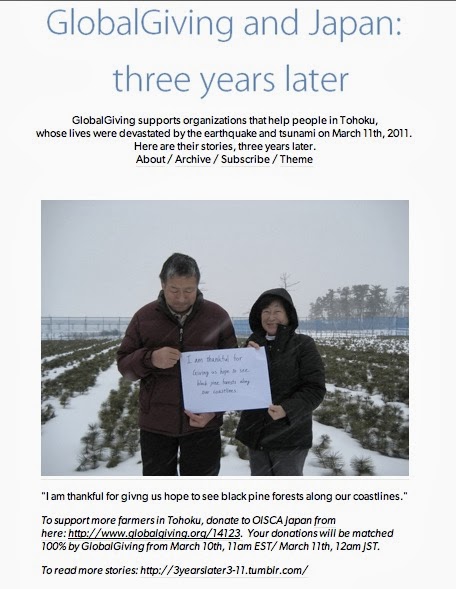 It's been three years now since Japan's Tohoku region tsunami and earthquake followed by the Fukushima Daiichi nuclear disaster.  According to this article on the three-year anniversary of these turn of events, a whopping 267,000 Tohoku evacuees are still living in temporary and/or makeshift housing, radiation continues to seep into large parts of the prefecture (and the ocean) since the nuclear plant has still not been fully contained, and over 2,500 people continue to be reported as missing, with close to 16,000 dead.  Rebuilding the Tohoku region is not as easy as it seems.  This is a big deal that will have long-standing repercussions, on many levels, for Japan and the world.

As many of you know, my shop has donation items for sale, two of which are still left whose proceeds will be donated to help with the ongoing Japan disaster relief efforts via GlobalGiving.  It's just a little step in the right direction, but every little bit helps, right?

Check out this thought-provoking website that showcases the stories of the tsunami-earthquake-nuclear disaster survivors, three years later.  It's worth a peek, in my opinion.

I blogged about the one-year anniversary of the Japan disaster here, and about heroism in the face of overwhelming odds here.

A well-curated Etsy Treasury for the three-year remembrance of the event can be found here.
Posted by EmeraldCut at 10:00 AM