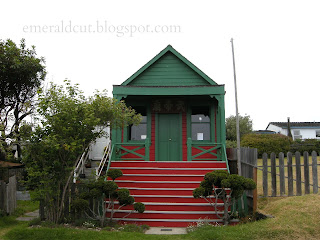 If you drive into Mendocino, CA, and take a side street called Albion, you are undoubtedly led to the Temple of Kwan Tai,* a mid-1850s-style architectural building painted brightly in brick red and forest green.  In contrast to the muted pastel coloration of most late 19th century-early 20th century Mendocino buildings, the Temple of Kwan Tai--splashed in vivid hues--regally catches the eye.  What is this place, you may ask?  I will tell you that it is more than the exterior reveals.


History
In her book, Chinese in Mendocino County (Images of America Series), Lorraine Hee-Chorley, the great-granddaughter of Mendocinco Chinese pioneers, discusses the Temple of Kwan Tai:

"The temple of Kwan Tai is the oldest original Chinese Taoist temple left on the North Coast.  The temple was built about 1854 by the first Chinese settlers, including Joe Lee, the author's great-grandfather, giving the Chinese a place to practice their Taoist religion (71).  The temple was enlarged in the early 1870s.  By mid-1870s, the temple had a full-time priest on the premises and would remain open 24 hours a day for the Chinese community (73).  The temple was in the Hee family until the early 1990s.  It was then donated to a newly formed nonprofit corporation that would continue to save and protect the temple in perpetuity.  The corporation now owns the property and is continually educating the public about the temple's history and the Chinese people's role in Mendocino history (74)."


The Chinese population in Mendocino County is estimated to have been between 500-700 people in the mid-to-late 1800s (49), but steadily declined when the logging industry was curtailed and strong anti-Chinese racism and sentiment drove the Chinese out.  By the 1940s, the Hee family was one of the few--if not the only--Chinese families left in the Mendocino area. 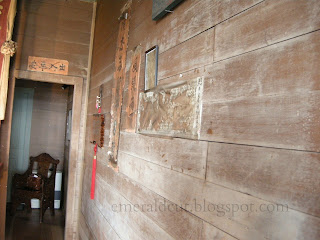 The Tour
When we arrived for a tour earlier this week, we were greeted by a fourth-generation Hee family member who graciously gave us a tour of the humble building.  The majority of the building's structural interior is mid-19th century original, as is the tattered and worn, faded piece of paper attached to the wall that--in Chinese--names the families who donated to the land purchase and construction of the building in the 1850s.  For history buffs, particularly ones interested in California history, this building is surely not to be missed.

Currently, the Temple of Kwan Tai is the only visible reminder of the once-sizable Chinese American community in Mendocino County beyond the Chinese Cemetery--which now only contains the Hee family plot.  In its heyday, the Temple of Kwan Tai provided a stable, religious home base for this community.  Its very presence as a permanent house of worship illustrates that the Chinese not only created a strong sense of community in the Mendocino area through its services, but also greatly contributed to the local economy by working in lumber mills, as cooks, servants, owners of Chinese shops, etc.  Additionally, the Chinese were integral to the relative success of the California farming industry (45); it is not a surprise that 19th-century Taoist temples can still be found scattered in other rural, as well as non-rural, areas throughout the state.

However, many physical remnants of this early-day Chinese American history are now lost, or are in such a dire state of disrepair that they draw little fanfare.  As a result, many are slated for demolition and are eventually built over and forgotten by most.  Mendocino is a prime example of this: at one point, Mendocino had a thriving Chinatown, as well as an extensive Chinese gardens--both are now long gone.  Fortunately, the Temple of Kwan Tai endures.  Due in large part to the efforts of the Hee family, the Mendocino area community, and other supporters, the site is now a designated California State Landmark. 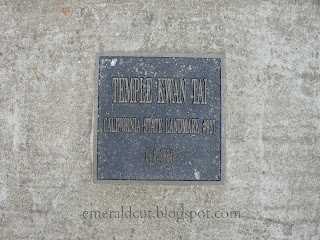 On our way home, my husband and I discussed this visit, and he said: "The [old time] Chinese history is disappearing."  This is unfortunately true, as most people look fondly forward and not back.  We sometimes forget that immigration, of all races, has been an ongoing event that spans centuries and shapes generations--it is this very history that has so deeply shaped California, and other areas too, without most of us knowing it.

It is the past that is so instrumental to our present--look not beyond the horizon and one can see the impact of times past in the physical items left behind from bygone eras.  The Temple of Kwan Tai will surely, without a doubt, lead us back.  Thank you to the Hee family for the tour, and for keeping this historical gem around for future generations.

Watch a video about the temple here.

*Images are copyrighted and cannot be reproduced for profit
Posted by EmeraldCut at 9:00 AM