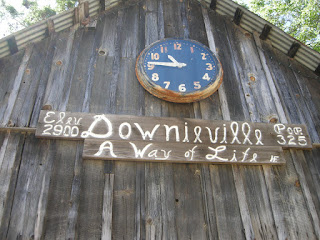 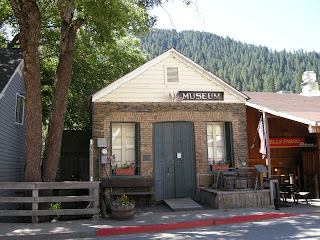 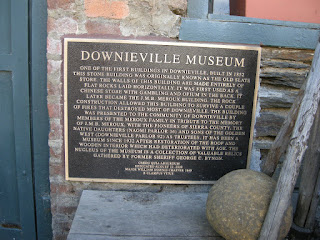 Continuing from my last post, we also visited historic Downieville, CA, a vibrant, history-laden Gold Rush town in Sierra County this past week.  I took few photos worth publishing, but what is truly worth noting is the town's museum--it's small but well curated, and gives one a true sense of 19th century life in a rough miner's town.  Housed in a building initially occupied by a Gold Rush-era Chinese business, the museum contains various mining equipment, 19th century women's clothing, a stuffed mountain lion, a small-scale model of the town in its heyday, American Indian artifacts, a two-shelf Chinese exhibit, and numerous other artifacts of interest.  Its historic eclecticism amazed us both.

According to the museum docent--a middle-aged woman who grew up in Downieville, went to college elsewhere, and later returned--the mountains surrounding the town had a Chinese population estimated around 3,000 people.  The population was not only composed of miners, but also entrepreneurs, cooks, and hard laborers, the latter of which were integral in building many of the stone structures still visible in the town.

Downieville (like most Gold Rush towns) is a destination whose very existence--one may argue--relies on its marketing as a colorful tourist spot, but it is a thriving community, as well.  On that note, I was secretly relieved that there were not any residents dressed in 19th century garb when we stopped by, but I can see why this theatrical, rough-and-ready nostalgia appeals to a particular demographic: it is the ultimate form of escapism for the city-drained population.  Visiting tourism-driven old towns is the closest we can get to the oftentimes romanticized past, literally, without having to directly experience it.  Beyond the tourism facade lies a so very American past that has immensely shaped its history.
Posted by EmeraldCut at 10:30 AM