A few weeks back, we took a trip to the rural Sacramento River delta towns of Locke, Walnut Grove, and Isleton, which are about 30 miles south of Sacramento.  This post documents our trip to Locke, a historically significant place in that it is the only all-Chinese town in the United States--and not an ethnic enclave of Chinatown within a town or city.  Specifically, Locke is unique in that it was a town built from the ground up by the Chinese for their own community. 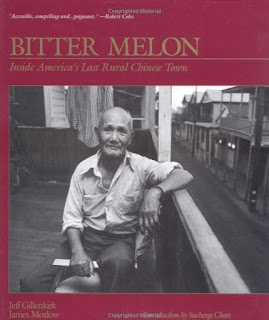 History:
The town of Locke was first settled by Chinese immigrants in 1915 after a fire ravaged the Chinatown in nearby Walnut Grove.  Over the years, descendants moved on for better opportunities; now there are fewer than 10 Chinese American residents in Locke.  A designated historical landmark, the town does have some thriving long-time businesses, notably Al the Wops (a popular biker bar) and Locke Garden (a Chinese restaurant).  Locke's centennial was celebrated this past May.

What you will find there: original 1910s-1920s architecture, remnants of old gambling/prostitution establishments (via doorways and signs), a few museums, natural decay--and many cats.


Below are photos I took in Locke: 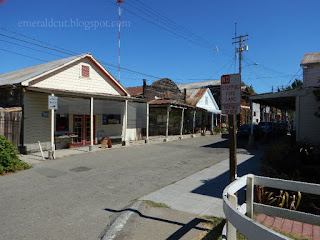 The above image shows roughly 1/3 of Locke's Main Street, which is (and was in the past) the commercial district.  A church is located on the next street over in a residential area.  FYI: Beyond Main Street are private homes, so be respectful and do not trespass. 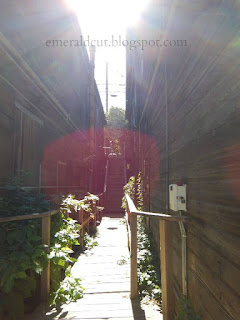 One of the alleyways on Main Street

Locke has a few of these wooden floorboard alleyways on Main Street that are overgrown with lush plants.  The alleyways lead via staircase from Main Street to the two-lane highway (which is on a levee), as shown in the above image.  Smaller, less decadent pathways are on side streets that run parallel to Main, and were used as shortcuts within the town. 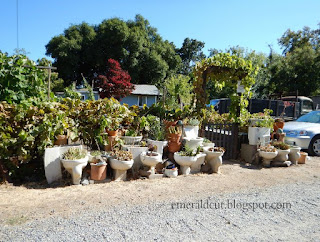 The toilet garden:
As the Chinese moved out or died, Locke's houses were sold to whites.  Ironically, the new owners wanted the Chinese houses but not their "tainted" toilets, so they threw them out.  The late Connie King, who was Locke's unofficial mayor and a second-generation Chinese American, took these toilets and in a subversive act against racism, made something "pretty" with them: a toilet garden.  This garden she prominently displayed in town on a side road near her home.

Connie King was an amazing woman, a tireless community activist who fought to preserve the history and integrity of the town--and for good reason.  King married a Locke resident, raised her children in town, and, in 1990, was integral in securing historical landmark status for Locke.  Moreover, King fought for the Chinese to own their own land in Locke (read the story in the next paragraph).  Ironically, her husband, a Chinese American WWII vet, was at the time not legally allowed to purchase or own land due to race.  Connie King passed away in her sleep in 2009.

There is a troubling backstory about home ownership in Locke.  Due to anti-Chinese laws and Locke being privately owned until 2001, the Chinese were not allowed to own their own land until 2004-2005.  It was then that the Sacramento Housing and Redevelopment Agency, whom the private owner sold Locke to, parceled up the land to sell.  Consequently, from 1915 up until the mid-2000s, purchasing a home in Locke meant that you owned the home but not the land that it sat on.  (This article sums up the story well).

Back to our trip:
When we were photographing the toilet garden, an act of serendipity occurred.  A hippie-ish man in his fifties or sixties, who was unpacking items from his car nearby, began talking to us about the garden.  It turns out that he is James Motlow, the photographer of the definitive book on Locke, titled Bitter Melon.  The book is now in its 6th edition printing for Locke's centennial this year.  Part oral history and part haunting photographic exploration of the interviewees, Bitter Melon is a worthy read and a unique snapshot in time.  Motlow now lives in Connie King's old house, which is across the gravel road from the toilet garden. 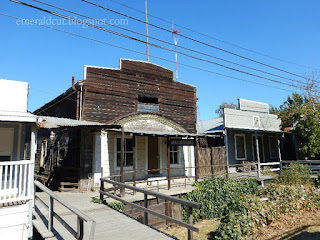 A view of the Main Street buildings from the highway

From the photo above, one can see where the top of a Main Street alley's stairway leads to: a business-type space complete with a porch, overhang, and walkway to the highway.  These old storefronts are the second stories of the buildings seen on Main Street.  Interestingly, the false facades still bear remnants of old painted-on business names.  Behind the photographer is the 50 mph two-lane highway atop the levee; on the other side of the highway-levee is the Sacramento River.

Side note: This tight highway-river-town layout leaves no room for error: one wrong steer and you are on the shoulder of the highway, or worse yet, in the Sacramento River. 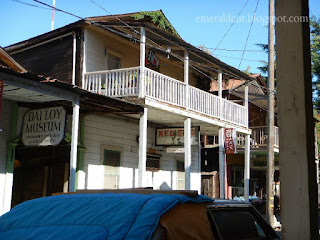 All the museums were closed when we visited, except the schoolhouse.  The above image is of the Dai Loy Museum: a gambling house.  Note the bright green arched entryway right behind the museum sign, which indicates the location of a business establishment for thrill seekers.  On other buildings, some of these arched entryways lead to a door with a lamp above it--likely houses of ill repute, or at least so when Locke was a thriving ethnic community. 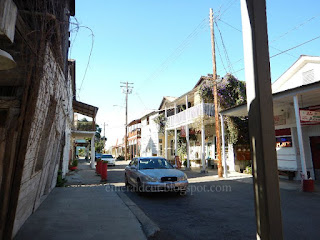 The building to the left is nearly falling over, and is etched with names and dates of visitors on its front wall.  Across the street is famous biker bar, Al the Wops.  Loud music was heard blaring when the doors opened.  Above the sidewalk are occasional overhangs whose shade makes the Valley heat more bearable. 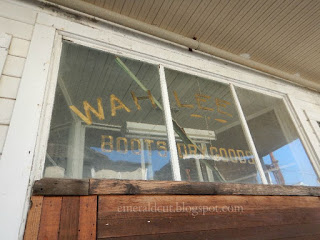 Afterthoughts:
This was not my first trip to Locke, however, it was my first in nearly a decade.  On my first visit to Locke nearly a decade ago, the mood of the town then was oddly New Age-y, but a sense of excitement could be sensed in the air: Connie King was still alive at that time (I remember seeing her), and Locke's residents had finally been able to own their land for just three years.

Now, in 2015, the old boarding house is a California State Park, and with it came, in my opinion, a renewed interest in preserving Locke's ethnic history.  The feel of Locke in 2015 is ever-so-slightly tourist-y and less influenced by the New Age aesthetic; its capitalistic allure more so the Chinese aspect (and the romanticism that accompanies it) and Al the Wops than a crumbling quirky old town.  The buildings are decidedly shabby and in disrepair; the town is overrun by cats; the chubby town dog has since passed; Connie King is gone--but something remains in Locke that I hope will never leave: a sense of struggle and continuance in a changing world.

Part 1 of this Sacramento delta trip can be read here.
See Part 3 on Isleton here.