A few weeks back, we took a trip to the rural California delta towns of Locke, Walnut Grove, and Isleton located about 30 miles south of the state's capital along the scenic Sacramento River.  You cross the highway and there is the river beyond a 10-foot levee: both towns are only 10 feet above sea level.  This post documents our trip to Walnut Grove, with some history thrown in. 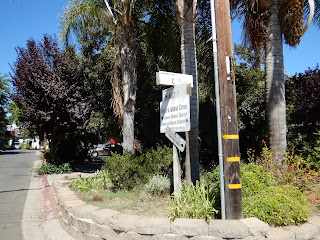 Sign in Walnut Grove indicating the old Chinatown and Japantown

History:
In the early 20th century, the town of Walnut Grove was home to a thriving Chinatown, and even boasted a large Japantown.  These communities shared a border due to racial segregation.  However, a Chinatown fire in 1915 provided the impetus for many in the Walnut Grove Chinese community to move--and move they did, a mile away, and built the tiny town of Locke from the ground up (see my next blog post).  Another fire in the '30s wiped out Chinatown yet again.  The Japanese American community in Walnut Grove, on the other hand, never burned down and instead became a cultural hub.  Yet after Japanese American relocation and internment during WWII, the population shifted; as later generations moved to urban areas for better opportunities, Japantown adapted.  According to this site, today there are still some ethnic businesses and a JA community in Walnut Grove.
Below are some photos I took on our trip to this historic town: 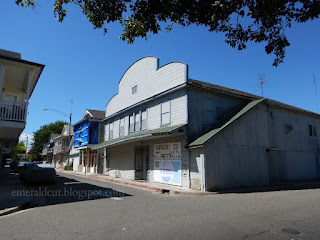 Hayashi Co. (market)
Located on the corner of Tyler and B. Streets; next to the public parking lot.
It appears that the storefront is still used--the phrase "productos Mexicanos" is visibly adhered under the bolded old shop name on the sign. 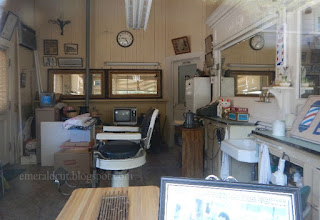 Kawamura Barber Shop
First opened in 1916 by an Issei (first generation), the owner's daughter continued her father's business until at least 1993--signs inside the shop note its history.  Looking into the window of this once-business was like stepping back in time: modern appliances can be seen among early 20th-century decor. 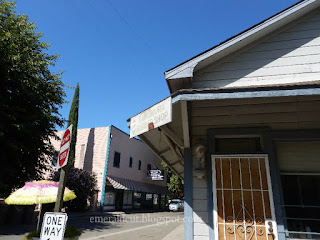 Front of Kawamura Barber Shop
(Chinatown is behind the photographer) 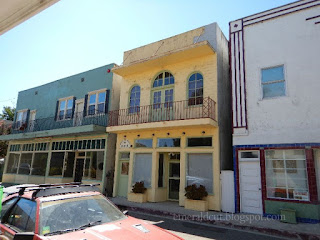 Chinatown buildings
Note the repainted Chinese Freemasons sign above the pale-green doorway of the yellow building.  I am unsure if these buildings were built prior to the 1915 and 1930s fires, but the buildings do indeed look old.  Mainly businesses (art studios, restaurants, etc.) line this street, and all appeared closed--or the doors were closed due to midday heat.

Afterthoughts:
Walnut Grove is a tiny tourist-friendly town without the tourist feel.  We really enjoyed the trip, and spent over an hour just taking it all in.  The streets of the historic districts shown here were mostly free of people; few cars lined the curbs.  Some restaurants were open, but otherwise the town was fairly quiet, which was perfect for exploring and taking one's time photographing the immediate area.  As for parking, the Japantown and Chinatown were a short walk from the designated parking lot, but a Japanese temple and a few other buildings are on other streets (see map here).  It was neat seeing the modern uses of the old buildings, but finding the Kawamura Barber Shop was the highlight of the trip, as it was a unique snapshot in time.  Japantown now appears to be a residential area, so we kept our voices down.  This town is definitely worth a visit if you are interested in history and rural, small town life: population 1,500.

Note: There is a short bridge that can be accessed slightly south of Walnut Grove to cross the river.

Posted by EmeraldCut at 8:09 PM