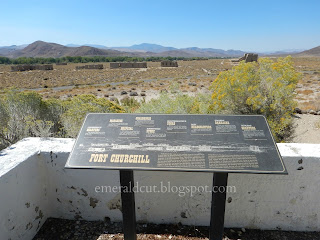 In September, we visited the Civil War-era Fort Churchill in the unforgiving Eastern Nevada desert.  The once-bustling adobe military base, which is over 30 miles east of Carson City, was built in 1861 to aid the territorial fight against the Paiute Indians.  Historic Fort Churchill was also a Pony Express stopping point.  The remnants of the fifteen-or-so original buildings, built completely surrounding a central training ground, can be accessed by foot or by car.  A line of green trees is seen beyond the fort's ruins--this is the Carson River. 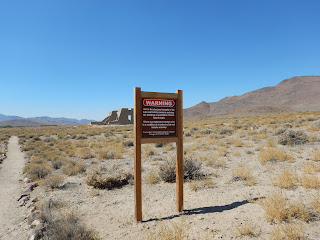 History:
The self-contained fort was built using local adobe, with lumber and other materials trucked in from San Francisco and other areas.  It was a costly endeavor, since Fort Churchill was only active for a period of eight years.  Abandoned in 1869, the adobe buildings were eventually auctioned off for a measly $750.  The buildings were stripped of usable lumber and other materials, leaving the delicate adobe walls vulnerable to the harsh elements--slowly, the adobe eroded over time.  A few changes of ownership later, the Nevada State Parks system acquired Fort Churchill in 1957.  Like the ghost town of Bodie, CA, the fort is left in a state of arrested decay.

Exploring the ruins:
When we visited in September, the temperature was over 90 degrees.  Despite the debilitating heat, we chose to walk and were rewarded with the park's uniqueness. 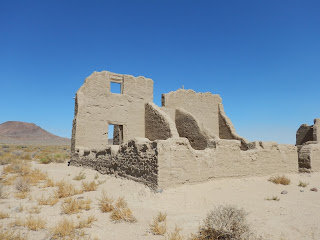 By foot, the trail is easy to follow and leads you around the adobe buildings.  Interpretative signs guide your way, although some were unreadable, faded from the heat.  Extremely fragile, the buildings should be not touched or walked into.  The building above was once a two-story dwelling; walls are still visible, as is the entryway and windows. 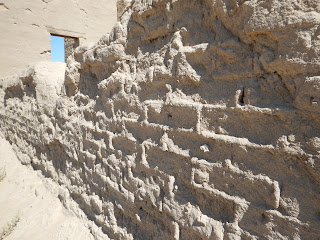 The textures of this adobe-building wall fascinated me: the shape of each adobe brick is easily distinguishable over 150 years later. 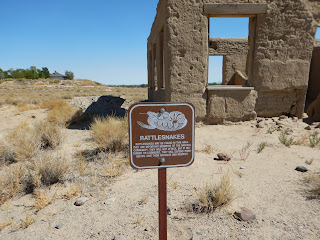 When exploring the many Fort Churchill buildings, it is easy to forget that this is rattlesnake country.  We steered clear of dry brush and other desert plants just in case.  The rattlesnake sign was an obvious reminder that rattlesnakes call the fort home...and that we are just paying visitors. 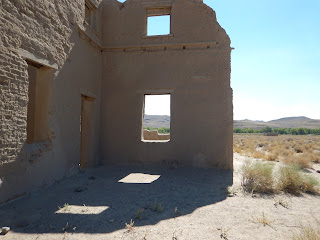 Despite being in the high desert, some adobe building walls--which were situated in shadowed areas--were fairly well preserved.  At least more so than walls that were in direct sunlight.  The above image shows the preservation of one such area.

I believe this structure was either the mess hall or soldiers' barracks (note the thin, wooden window frame panel left behind).  Most of the fort's buildings were in direct sun and a similar state of natural decay, while others were completely gone, with just a mound of earth--and in some cases, an interpretative sign--to inform the visitor of its significance.

Due to the heat, and the possibility of heatstroke, we did not walk by the hospital ruins.


Afterthoughts:
We researched Fort Churchill online before visiting, and were pleasantly surprised with reality vs. its Internet representation.  All the images found online showed the remains of just one building, or a few buildings, so our assumptions of the place were based on this.  Little did we know that because of the desert climate, adobe composition, and lack of roofs, the structures greatly resembled one another!

Additionally, this state park is set up in an accessible easy-to-understand way.  Near the parking lot are: a small museum (a must-see), bathrooms, a rangers' station, and a map of the fort's layout.  Beyond this are the ruins.  Driving the two-lane road around the fort's perimeter allows for a nice general view of the ruins; the simple, level walking trail allows for close-up views and leisurely photo taking.  Remember to bring water if you walk the trail, as it is the desert.  The park also has a primitive camp ground and picnic areas.

Bottom line:
Highly recommended!  Two hours should be enough time to explore the park.  There is an Indian reservation an hour away, which, after we got home, made me connect the dots: the Indian reservation was Pauite; Fort Churchill was built to dominate the Pauites.  This realization left a lump in my throat.  Despite this conflicted historical legacy, we would visit again.

Posted by EmeraldCut at 4:10 PM