I spent the afternoon reading Romola in the warm sunlight (a treat after hours of researching earlier in the day), which was comforting because there was a bit of a breeze permeating the air.  Otherwise, sitting outside would have been too hot for my mild weather-inclined self.  Right as I was about to return inside for refuge from the sun, my husband came out--and we saw the most sweetest sight: two hummingbirds sitting calmly next to each other on the electricity wire.  So that was where the high-pitched chirping that I had heard all afternoon came from!  Wait a minute...hummingbirds actually sit like other birds?  Yes.  It was a new fact to us both, and we reveled in our attempts to capture these elusive creatures flitting about in our yard, returning to their tree home, and alternately sitting on the electricity wire; there were three in total.

I was surprised by how often they would move their heads when sitting on the wire, as if the movement would help elicit a fight or fight response in case of a predators.  We took pictures--lots of them.  Here is a collage of a hummingbird on the wire; we missed the photo opportunity when two were sitting there.  I wish that I captured the showy iridescence of the bird's plumage, but the lighting and angle from which I took the pictures (pointing upward) were not conducive to bringing out a colorful display of plumage. 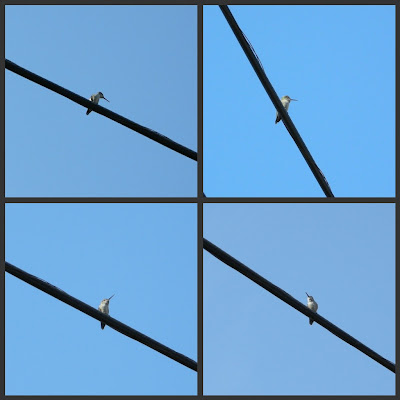 Posted by EmeraldCut at 5:28 PM