Just over two hours southeast of Reno, and a few lonely stretches of highway later, we finally arrived at Berlin-Ichthyosaur State Park in Nevada.  (Note: The nearest town of Gabbs is 23 long miles away.)  The windy two-lane dirt road that leads into the park is narrow and bumpy, but a sedan can maneuver around potholes if the weather permits.  Rain was forecasted for the next day, so we were met with dramatic thunderheads and various pockets of sunlight and darkness the entire afternoon, which lent a foreboding feel to our visit.

Taking a left at the fork in the road, we entered the ghost town of Berlin.  The right fork goes to the dinosaur fossil.  I had read numerous online reviews before planning this trip, so the small number of buildings left in the place didn't surprise me.  One house actually looked inhabited, perhaps by one of the park rangers.  A plastic child's tricycle or car sat in the front yard. 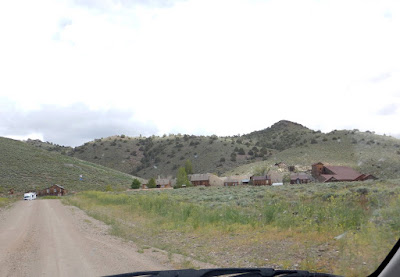 As we drove through the ghost town, we didn't find many fellow tourists, so we took a narrow backroad from the ghost town to the ichthyosaur fossil a mile or two away.  According to the park's website, ichthyosaur fossils were found in the area as early as the 1920s.  However, most fossils were excavated in the 1950s-60s.  Ichthyosaurs were big marine reptiles that lived over 90 million years ago in the area when Nevada was still covered by the ocean. 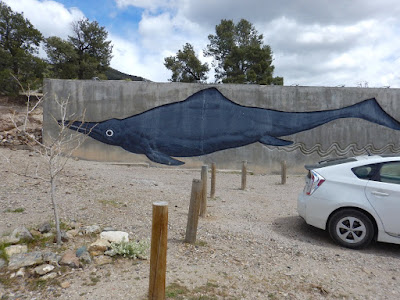 It was at the fossil site that we found a handful of cars and a large gathering of people--a ranger-led tour was about the begin.  We graciously skipped out on the 40-minute tour, opting instead to peer through the window to look at the remains.  My impression of the fossil: huge.  It spanned the length of a few cars; a photo isn't shown here because my photo did not do the fossil justice.  Above is my photo of an ichthyosaur mural outside the building.

We drove back to the desolate ghost town, which is more our cup of tea. 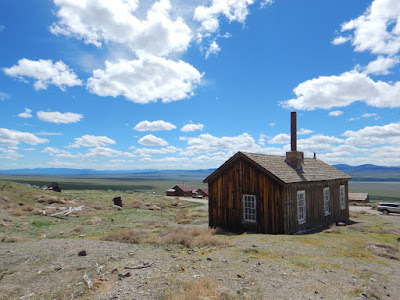 Above is a view of Berlin from near the backroad that leads to the ichthyosaur spot.  Throughout this tiny sprawl of civilization, we found interpretative signs that gave some information about the building's previous inhabitants, as well as about the Berlin Mine and the Diana Mine.  The town of Berlin was first mined for gold in the 1860s, hit its high point in the early 1900s, and then largely faded away by the 1910s.

Below is an interesting building that was inhabited in the 1970s (or so the sign says), making Berlin not quite an old ghost town.  A no trespassing sign still sits visibly on the building, as does an outhouse a short distance away. 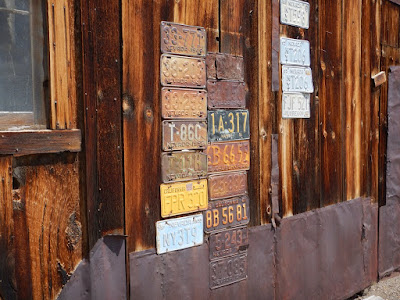 Next to this patchwork building are the remains of substantial mining activity, including an old car, mill, and a large tailings pile.  I think this is the Berlin Mine. 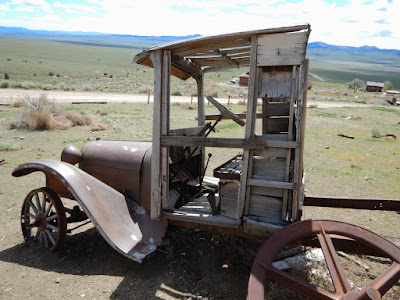 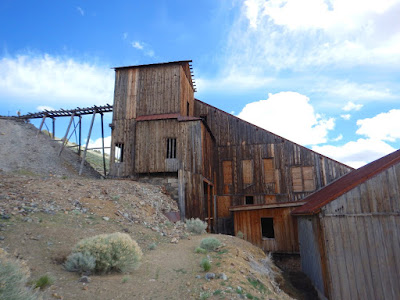 We then meandered down the short road into town.  Left in a state of "arrested decay," Berlin has minimal upkeep to stabilize buildings and other structures.  Yet, I found modern insulation and hardware everywhere (to maintain structural integrity).  Also, there were remnants of turn-of-the-century civilization--ceramics, glass bottles and shards, and the like--laying around outside on tables.  I guess visitors aren't as brazen as those who visit Berlin's famous ghost-town cousin, Bodie, CA.  Sadly, I could easily see someone stealing a relic from the latter! 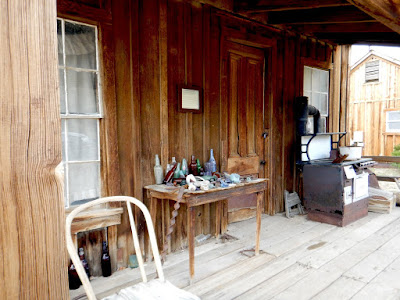 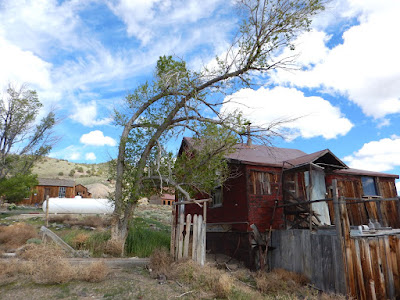 At the entrance of town is the Diana Mine, which was privately owned and its profits never released as public record (see below).  Isn't the panoramic view beyond the mine breathtaking?  You can see the road we took to enter the park if you look closely into the horizon.

Afterthoughts:
While literally in the middle of nowhere, we enjoyed this out-of-the-way trek to Berlin-Ichthyosaur State Park in Nevada.  The ghost town resonated more with us than did the dinosaur fossil site, but then we prefer solitude to interacting extensively with people.

In comparison to Bodie, this site has far fewer buildings and its history is not researched as thoroughly (as shown on historical building markers).  Also, Berlin isn't quite my definition of a ghost town in a state of "arrested decay."  However, I enjoyed the stillness, historical relevance (gold rush town), and panoramic view that Berlin gives its visitor--it's easy to imagine a town dweller there, in times past, staring out into the roving wildness and daydreaming about days ahead.  This is something that Bodie, with its throng of of visitors, does not offer.

Posted by EmeraldCut at 4:53 PM