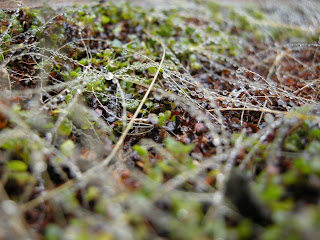 Is it already past the mid-year point?  I cannot even begin to fathom how quickly the year has unfolded, molding itself into a largely non-linear course of days, weeks, and months--culminating in now.  Some days feel infinitely longer than others, while others overlap and converge.  Is it the onset of age that makes one forget what one did yesterday?  At least it's written in my journal.  You see, that's something that I've begun doing on a regular basis just this year--after a handful of years of intermittent journalese and stream-of-consciousness scribbling.

When I reflect back on the six months of time immediately past, a recurring thought is:

As in a general time frame and, more specifically, mortality--the age-old identifier of getting old.  It's not that I fear aging, since it's actually quite the opposite, as I fully embrace it.  Age, for me, is merely a number that grows in increments of one per year.  But some people mourn the years that are forgotten, the messy lost years.

A few weeks ago now, I printed out seven copies of my thesis to be bound and submitted for summer 2013 graduation.  My husband took the ambient-rich shot below, of five copies, for the other two had yet to be printed.  It has taken me a difficult six years to obtain this degree, but I realize that time--so fleeting, so terse--has a strange way of providing lessons; coming full circle. 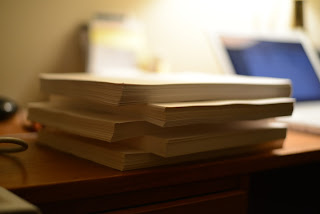 Taking a peek outdoors, I spy on our hummingbirds, stealth-like and spry, in hopes of one day being ignored rather than spied on.  With their daredevil spirit, hummingbirds make up for their diminutive size.  If only we were so gallantly protective, graceful, and street smart--all at the same time.  However, if hummingbirds were human, I am unsure if I would like them more than I do now. 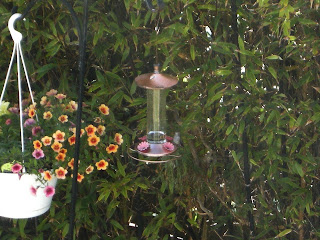 The future holds infinite possibilities against a darkened sky. I just have to seek them out, push myself to look beyond the deepening horizon, and try.  Trying is the most difficult part of it all; at times it is the dooming precursor of frustration more than the origin of inspiration.  But it's always the process that is itself, contradictory: while confining one like a canary, the process can allow for a critical learning experience, too.  Like journalese and stream-of-consciousness scribbling, attempts at uncovering the unknown are ultimately, undoubtedly worth it--to the bleary eyed and worn, included.
Posted by EmeraldCut at 10:00 AM

Thank you, T.! P.S. I secretly (or not so secretly) miss your blogging.