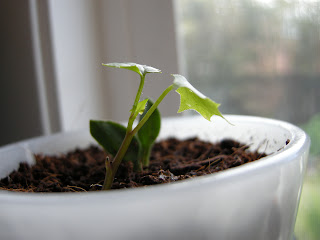 A few nights ago, the heavens forcefully spilled forth, opened its mouth and bellowed.  Winds hit up to 50mph, so my husband says, and I heard their fury.  I heard whams and booms and slams; car alarms sounded in a haphazard succession.  The double-paned windows shook with an exasperated rattle, as if they were made of paper and not glass.  I watched slender-bodied trees bend for minutes on end, etching elongated, darkened shadows in the night sky.  When the lights flickered well after midnight, I began to worry--just ever so slightly--for the mad howl of wind coupled with strange, foreign sounds and complete darkness conjured up spooky thoughts; my imagination ran wild.  Under different circumstances, I would have considered the winds a magnificent natural occurrence.  Isn't it funny how loud things that go bump in the night can frighten one so?

As night made way for dusk, as day perilously broke, the winds mellowed into a consistent, strong breeze that lasted the entire day and rushed into the evening.  That morning, I took a quick peek outside, and all seemed normal--not a leaf, branch, or petal was visibly out of place.  Perhaps the newly planted seeds have blown asunder, but even that could not have been fully prevented anyways.

Reflecting back on this experience...I genuinely believe that humans have something to learn from nature, which is that the natural world moves forward.  Broken branch?  It'll be fine.  Gale force winds?  Bring it on.
Posted by EmeraldCut at 10:30 AM

And always a strong reminder that Mother Nature is most definitely the one in charge!