Recently, we took a little trip to the Point Cabrillo Light Station, which made for some otherworldly photographs: The light station's light pierces through the fog, and can be seen miles upon miles out to sea--the ocean is behind the lighthouse.

Fun fact #1: A "light station" is different from a "lighthouse" in that a light station encompasses the lighthouse plus the additional buildings surrounding it, such as the lightkeeper's house and blacksmith shop.  According to this book, Point Cabrillo is one of the few West Coast lighthouses that has nearly all of its original structures still intact.  Pretty good for a light station that was built in 1909. 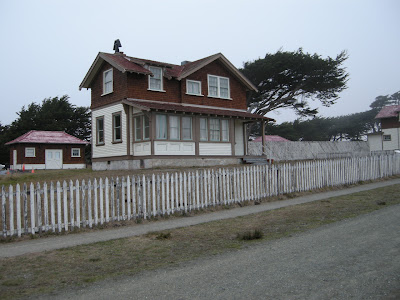 One of the three lightkeepers' houses.

Fun fact #2: The lightkeepers were ranked. 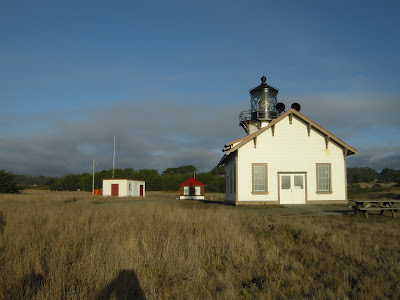 View of the back of the light station from the inner edge of the cliff; not too far behind me is a steep drop into the icy, unpredictable waters below.

Fun fact #3: The lightkeepers' houses are behind the barely visible dark trees on the left side of the image. 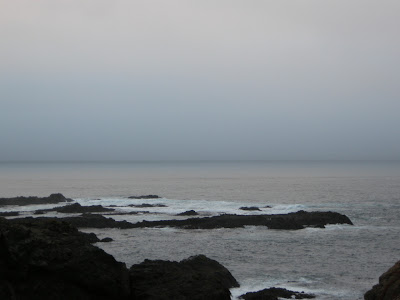 One can easily see why a light station was needed on this stretch of coast--it is very rocky and the surf is quite intense. 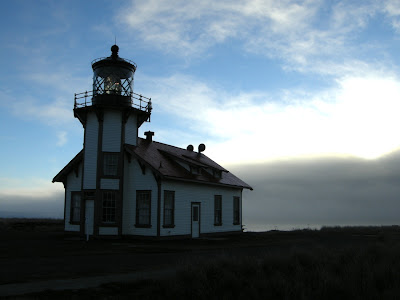 I must admit, the inspiration for this trip was, appropriately, Virginia Woolf's To the Lighthouse, which I have blogged fleetingly about here and here.

Can you believe that this California state park was at risk of closure last year?  It's a good thing that California just so happened to stumble upon nearly $54 million in hidden funds.

We need some genuine accountability and transparency, folks.
Posted by EmeraldCut at 10:00 AM

What a fabulous trip. LOVE IT! Thanks for posting. THREE CHEERS to having some genuine accountability and transparency!

It was a really relaxing and much needed mini trip. Interesting history in that place! I would definitely recommend the book, "Point Cabrillo Light Station"--see link in post. :)